Every team is created based on different criteria and budgets. In an effort to make things even more interesting, I tried to pick different players for each team. Of course, you will find some common players from team to team (I mean who wouldn’t select Dinos Mitoglou when he costs only €0.16m) but we are talking for maximum one or two players each time.

Without further ado, here are three lineups that can lead you to victory!

The first lineup is kind of green, as there are four players who either have played or currently playing in Panathinaikos. In the guards, I went with Nick Calathes and Kostas Sloukas (maybe the fifth green of the list next year?). It doesn’t take much to understand why. Both are in excellent form and are expected to be the captains of their teams inside and outside of the court.

In the forward positions, we have the ‘ex’ and the ‘next’ power forward of Panathinaikos. Thomas has the difficult job of filling Singletons’ shoes this year and so far he seems to do good. Very dangerous in the offence and with great statistics in the first games of the season.

Chris Singleton has also started well in Barcelona. Together with Tomic are appearing to be the two players in best shape for Barcelona right now.

Moving on, Joffrey Lauvergne is one of the biggest names of the new Euroleague and I expect that coach Obradovic will take the best out of him. Long story short, buy him now that he’s still kind of cheap.

The rest three starting line-up positions have been filled by some very fresh and interesting Euroleague projects. Tony Crocker is a very promising choice from coach Bartzokas who is famous for his strong recruiting abilities. In the same sense, Zach LeDay is a very appealing project under coach Blatt. Not sure how good will perform in his rookie Euroleague season but I believe that his stats will surprise us.

Last but certainly not least, Dinos Mitoglou! Second season in Euroleague, first as (almost) a starter, he is an excellent choice if you want a promising and budget-friendly player.

TIP: Avoid spending too much money in your substitutions. As you can see in this team, I have included only one sort of “heavy” contract. That is Nate Wolters who is expected to do a great opening season in Euroleague after attending the Zalgiris Kaunas college! 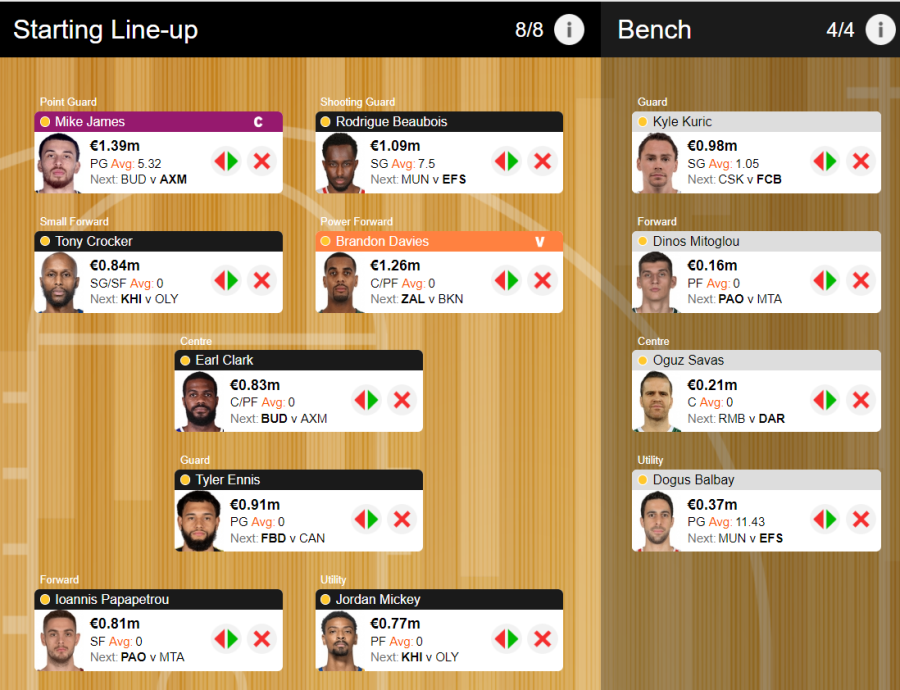 Our second lineup has kind of the second budget and three players in common with the first (Crocker, Mitoglou, Balbay). This time I went for a more aggressive duo in the guards with Mike James and Rodrigue Beaubois. Both are two of the most spectacular players when they have the ball on their hands and I believe that we will see them finishing many games with double digit rankings this season.

Crocker and Davies are two smart and not so expensive options for the forward positions, while Earl Clark can be a nice Euroleague surprise playing for Buducnost. His performances with Besiktas the previous years have created a lot of expectations.

Tyler Enis, Ioannis Papapetrou, and Jordan Mickey are completing the starting lineup. All new in their teams and with great incentive to succeed. They have already shown in the opening of the season that they are in good condition and I really hope that we can see them having a solid year in Euroleague.

TIP: Always make sure that you leave some extra budget aside in case that everything goes South after the end of the first round. It gives flexibility and higher chances of succeeding your goal. 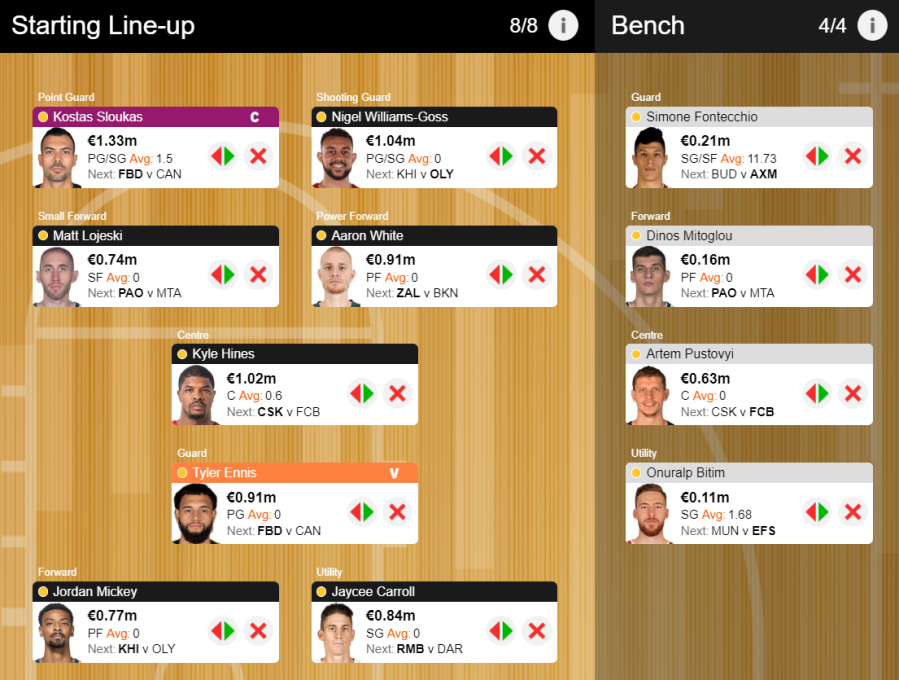 My third lineup is more budget-friendly than the other two. My remaining budget is €1.33 million and that is because I mainly tried to go for ‘value for money’ choices this time.

Kosta Sloukas and Nigel Williams-Goss are my point and shooting guard respectively. We have already referred to Sloukas’s value, so I will go directly to Williams-Goss. He is a Euroleague rookie who similarly to Zach LeDay has been selected by David Blatt in order to introduce a new type of basketball to Olympiacos. In the first games with the red jersey, he has shown that he is a great scorer. If he manages to improve his assist-turnover ratio then sky is the limit.

With Matt Lojeski and Aaron White in the forwards you know what you get. Matt is healthy and, if remains that way, seems ready for an astonishing season. White can only be better after his last season in Kaunas. And he will be.

With Kyle Hines and Jaycee Carroll, I decided to invest both in experience and good price. The two of them have unprecedented experience in Euroleague and they will surely help their teams succeed their goals this year.

Finally, Mickey and Enis are two exciting projects trusted by Bartzokas and Obradovic respectively. We talked about them before and I’m convinced that they will have a strong Euroleague season.

TIP:  Go for players who play in teams that are expected to win a lot. In this way, you can exploit the 10% winning bonus.

Did you think that we were done? Not so easy! Now that you have seen my top three suggestions for the Euroleague Fantasy Challenge, it is time to present five powerful tips which can help you stay on top of the game as it progresses.

1. Be stingy with your back-up players

There is absolutely no need to spend a lot of money for your back-up players. It’s way better to keep a good amount of your budget for the rough times. In other words, make sure that you have some money aside in order to fix any wrong choices you made during the first round(s).

Your Euroleague Fantasy Challenge list is completed and you are ready for the first game on Thursday. Am I right? Yes and no. Try to find some time and check your list again just a bit before the games begin. In that manner, you can be sure that none of your players has suddenly been injured or become unavailable. If you don’t pay attention to this little detail, you might see many of your points flying out of the window.

What’s better than having players who can cover many different positions? If you manage to find versatile players who perform well, you can give yourself an incredible advantage compared to competition. This type of players provides you with the freedom to continuously adjust your plans and switch players around without any consequences.

You want to have a solid back-up plan in case that Round 1 isn’t that successful for you. How can you do that? Simply by making sure that you have enough resources to make some drastic changes before Round 2 begins. That being said, always try to build budget-friendly teams in the beginning of the game,

The first rounds of the game are your golden chance to make some money for your team and eventually increase your budget. For that reason, it’s crucial to find the best bargains in Euroleague Fantasy Challenge before it begins. Players can only increase or decrease their value by 15% per round, so by making the right choices you can ensure that better players will come to your team in the future.

This is it guys! That’s all you need to know about 2018-19 Euroleague Fantasy Challenge. During the selection process be careful and make sure that you have a certain strategy in place. No matter what, though, make sure that you enjoy playing and watching lots of  Euroleague games. After all, in the end of the day it’s just a game and it’s there for us to have fun!