The Players Tribune just published last week a great piece written by Allen Iverson. In the article, Iverson reveals many different aspects of his basketball and personal life proving once again that he remains one of the most eye-catching basketball figures.

Through his basketball journey, he has been many times criticized due to his eccentric lifestyle and sometimes controversial behavior. One thing that nobody can say about “The Answer” is that he hasn’t been true both to the game and to the people around him.

His NBA All-Time Starting Five selection proved that again. Allen Iverson was asked to pick the top NBA starting lineup of all times excluding himself. His choice was very interesting as we saw players such as Magic Johnson and Hakeem Olajuwon to be left out.

Find also: Could Luka Doncic be the next Dirk Nowitzki?

To the contrary, Iverson seemed to have strong faith in the current NBA generation, as two out the five players he chose are still taking the NBA world by storm. This fact can also be considered as a strong proof by Iverson’s side that he is not the type of guy who is obsessed with the past.

He acknowledges that as the sport is rapidly moving forward and he is ready to praise those who truly deserve it. And that’s what makes both Allen Iverson and his NBA All-Time Starting Five selection so interesting for every basketball fan around the globe.

Without much ado, here is the NBA All-Time Starting Lineup as chosen by Iverson himself:

Steph Curry, Michael Jordan, Kobe Bryant, LeBron James and Shaquille O’Neal are part of AI’s list for his NBA All-Time Starting Five. Of course, this list is completely subjective and it doesn’t mean any disrespect to other NBA legends such as Magic Johnson, Larry Bird, Tim Duncan and many more.

After all, as Allen Iverson himself explained while talking with Stephen A. Smith in ESPN radio, the list refers to five guys that AI really enjoys seeing on the court. It has nothing to do with whether they are the five greatest of all times or not.

Furthermore, Iverson clarified that the reason he didn’t go for someone like Magic Johnson had simply to do with the fact that they played the game some years before him and he hadn’t experienced them playing as much as he did with the five guys that he included in the list.

In any case, though, we are talking about a very tricky list for anyone to put together. NBA is a galaxy of basketball stars and legends for many decades now and it goes without saying that there have been quite a few who had a serious impact on the way we hoop today.

Shaquille O’Neal was the first to come up with a response to AI’s list and judging by his picks Iverson did a damn good job with his. Shaq had only one little disagreement as you can see below.

What was this? O’Neal replaced himself in the list with Allen Iverson. For sure a gesture of great altruism by probably the most dominant center in the history of the game.

Needless to say that many of Shaqs’ followers disagreed with his selection and told him that he should start giving a little more credit to himself given the influence that he had in the game. If we take into account that every team needs a great big guy, I think that most of us would agree that Shaq has to get back in this list! 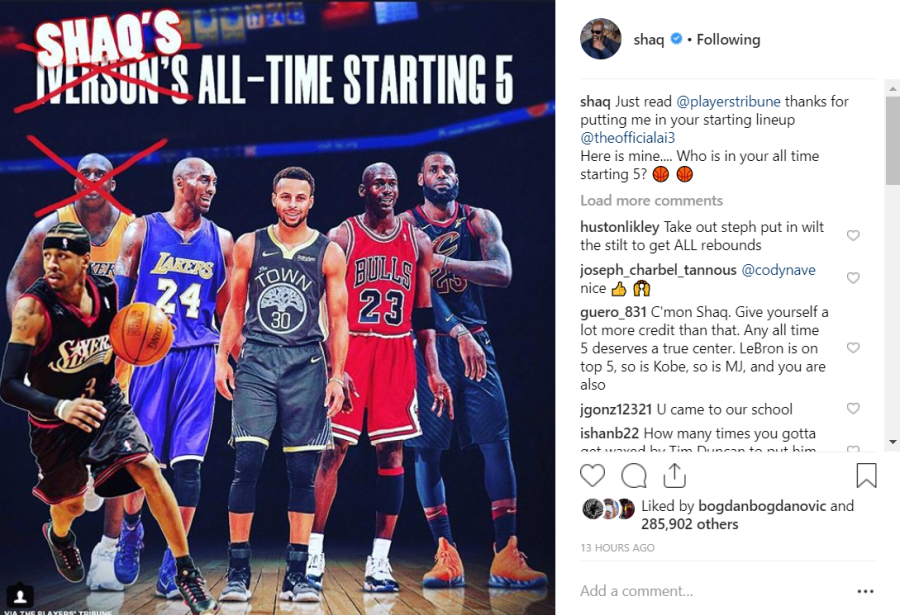 After revealing his NBA All-Time starting 5, Allen Iverson referred also to the eternal discussion around the greatest player of all time. The Answer made his feelings pretty clear at this point by voting for Michael Jordan:

“I’m hearing a lot of people these days fronting like they have LeBron over Mike!!

Man….. listen. First of all, I love LeBron. I have nothing but love for LeBron. That’s the best player of his generation, one of the best ever, a great husband, great father, great role model, and it’s even beyond that: What he’s doing with that school in Akron?? It’s a beautiful thing.

We’re talking about Black Jesus himself.

And I don’t really have much more to say beyond that. Mike is the GOAT……. Mike is always going to be the GOAT. And please don’t even insult me with any of this “stats, AI!” business, like you have a chance of changing my mind.”

After all this discussion about the greatest NBA starting lineup, I had also to join the debate and present my dream five below.

There you have it! The DunkStories All-Time Starting Five: Allen Iverson, Michael Jordan, Kobe Bryant, LeBron James, and Hakeem Olajuwon!

The selection is again purely subjective and doesn’t mean that those not included couldn’t be there. But there are only five spots available so someone should stay out. And this is the million-dollar question for you, as well!

Who is in your all time starting five? Leave a comment below!